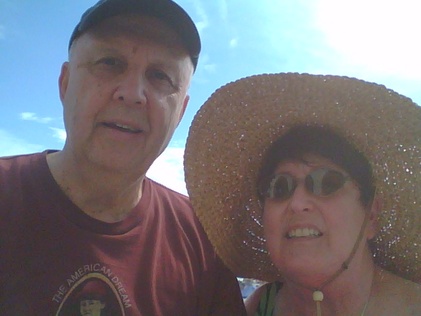 In Chronicles of Sam, Sam Redman thrives in his South Jersey bedroom community until nature, murder, travel, and other entrapments, take him from his comfort zone.

​His wife Lana allows Sam to steer their ship of state as long as she can warn of troubles on the horizon. The stories cover life at its strangest, including skunks, mayhem, religion, Mormons, and other U.S. institutions.

Guardians of the culture help Sam through his adventures. Waitresses, priests, Achmed the Dead Terrorist, even the Jersey Devil, lead our hero through the murky landscape and back to the welcoming shores and his patient bride.

The Battling McManns: Sam’s daily walk pulls him into an ongoing conflict of man, wife, and dog.

Wardrobe Malfunction: Sam and Lana take to the beach until Sam’s dress code mishaps cause an angry horde to hunt for him.

A Bat! A night flyer interrupts the household.

Murder in South Jersey: Sam plans his great mystery novel, then his victim disappears leading the police to his door.

Self-Denial: Observing Lent is challenging when Sam does battle with his parish priest.

Harry P. Walker: Commuting into Philly, Sam shares his troubles with a fellow commuter who proposes to solve both their problems.

Burning For Rehoboth: Two days of rest and relaxation turn into pick up football, sunburn, drinking, and gluttony in sunny Rehoboth Beach, Delaware.

At the Diner: Sam and Lana dine while men in the next booth plan a robbery.

Sam folded the paper and looked outside. Perfect weather for my daily walk, he thought. He found his ball cap and headed towards the sidewalk to begin a stroll through the tree-lined neighborhood. After a wave to his neighbor, he assumed a pace that would surely burn off his breakfast in minutes.

He managed a “Sure is, Kelly,” before she and her yoga pants spun back, distanced themselves and become a fond memory. I’m old enough to be her father…or maybe even grandfather, he sighed. He resumed his trek.

​Bill Hannigan, retired state trooper, stopped rocking on his porch, put down his Ladies Home Journal and waved as Sam approached. “Good day for a walk, Sam,” he called out. “I could watch you wear out shoe leather all day,” he laughed. “Except when Kelly runs by.”

Sam checked his list: beach chairs, towels, sunscreen, newspaper, credit card. They met at the base of the stairs. “Ready?” asked Sam. “Ready,” said Lana, clutching her Harlequin. He crammed the trunk with the necessities for the day and they jumped into the Prius headed for Rehoboth Beach, Delaware from southwest Jersey.

“I’m glad we opted for Rehoboth today,” Sam said. “Just different enough from the Jersey shore to make the drive worthwhile.” Lana closed her romance, the buff cowboy on the cover seeming to wink at the reader. “And plenty of fun stores,” she replied.

Finding a parking spot along Rehoboth Avenue, Sam pulled his MasterCard and fed the meter. The couple met at the trunk and pulled out chairs. They shed shorts and street shoes, exposing their swimsuits and bare feet. The couple grabbed their flip-flops as the tarmac scorched their heels and insteps.
​
Next, the mandatory slathering of sunscreen on all exposed skin. Sam coated himself with the tropical mixture and wiped the greasy aftermath on his trunks. With one hand, he grasped the beach bag overstuffed with towels, and with the other, a light weight beach chair. Lana hoisted the strap of her combination beach chair/drink holder/book sleeve onto her shoulder. The couple trudged on.
​

The squirrel mouthed an acorn and ran up a tree. A cat stalked a sparrow hoping for a trophy to drop on his master’s doorstep. Overhead a crow searched for prey. This is boooooorrrrring, he thought.  This can’t be my day. Watching animals and getting older. I need a change.  Sam Redman closed his back door, drained his Wawa Colombian Roast and tossed it towards the kitchen can. The cup bounced off the rim and skidded across the floor, leaving a path of brown liquid.

Crap! He pulled a paper towel from the Owl-shaped holder bought by Lana at yet another crafts fair. The whole roll came off and skidded across the floor unfurling until it wedged under the stove. Sam yanked the paper from the clutches of the Amana, ripped off an arm-length of sheets and crawled to the spill. He wiped until the liquid was absorbed, then slam dunked towels and cup into the can. My adventure for the day. Lifting himself, he slipped on an unseen puddle and landed on his backside “What was that,” came a voice from the laundry room.

“Nothing Lana, just tossing my coffee,” he replied as he stood. There has to be more than this, he thought. Retirement is nice, but I need to do something more than watch the world go by. He wiped off the coffee stain, climbed the stairs, and sat at his office desk. Now what’s on Facebook?

Scrolling through postings of cute food, religious verse, and ads for cheap hotels, he closed the app and sat back. He examined his small sanctuary seeking inspiration. A laptop, printer, bill-paying desk, and a goofy wooden Christmas reindeer offered no epiphany. The bookcase. Should I read something? I do spend too much time in front of the tube.  He leafed through a few paperbacks and started an Agatha Christie. The colorful setting and mysterious characters drew him into the story.
​
He closed the paperback. Ah. I promised myself I’d write my great novel someday. No time like the present! He opened a Word document and stared at the screen trying to remember his plot. He smiled. Murder in South Jersey, he thought. That’s what I was going to call it.