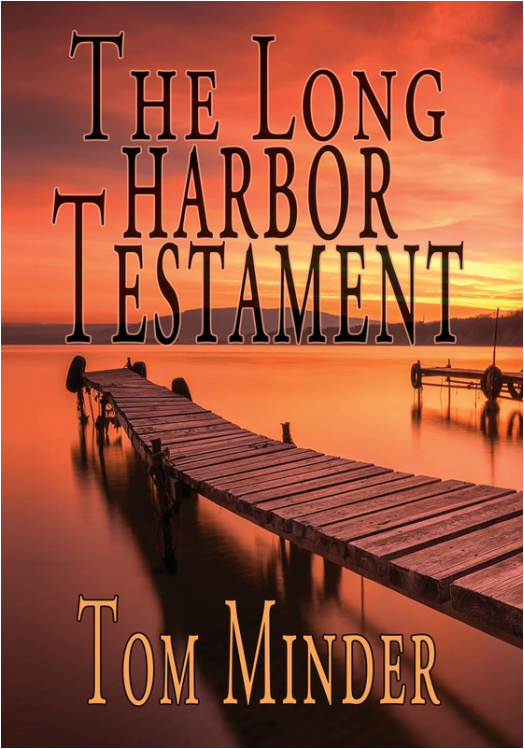 Gambling, drinking, Girl Scout cookies, a dead man with a morbid sense of humor, and a wedding with a miracle. The Long Harbor Testament merges these elements into a story of the killing of a local bookie and the impact on a troubled priest, a mobster, and the police detective trying to work through the mysterious death.

The novel explores the bonds of family loyalty, and the role of religion in our lives. Sermons prepared by the priest and others parallel the storyline and explain motivation and the need for forgiveness. It is also sprinkled with humor and the pleasures and effects of fast food consumption.

Please see an excerpt below.

He glanced out the frosted-over window of his small office in St. Augustine’s rectory on the cold November Saturday afternoon. He had been a priest for five years and actually liked creating sermons while in seminary. Now he would gladly just wing it from the pulpit. Most people don’t really listen anyway.

So here he was preparing another sermon for folks who would rather skip the sermon and get on with mass. Those extra ten minutes could be used to open a beer, grab some Doritos, and position oneself on the Lazyboy. Then three hours to watch your team under-perform and destroy your football picks. He reached for his own football sheet. Another one fifty down the drain.

So what’s the sermon for this week? Genesis and man’s fall from grace.

My friends in Christ, God in his abounding love created the first man, Adam, in his image and likeness and built for him an earthly paradise free of pain and suffering… and free of surprisingly accurate football point spreads and over/unders.

God understood Adam’s need for companionship and so constructed a helpmate, Eve, to share paradise with him and make him happy. Bad move, God. Things will quickly go downhill from here.

Why is the over/under for the Bears and Eagles set at 46? That’s too high.

But Adam and Eve were flawed, as we all are, and were convinced by the serpent that they would become as powerful as God if they merely ate of the Tree of Good and Evil. When confronted by God, Adam replied with the first recorded cop out in human history…”The woman made me do it.”

And here we are now. SSDD: Same shit, different day.

Jim mulled over his options: keep it short and sweet, or delve into Cain and Abel. Now, there were prototypical siblings. Who’s to say Cain didn’t have a good reason to club Abel? There’s always a good brother and a bad brother, isn’t there? Abel and Cain, the Prodigal son and his nose-to-the-grindstone brother, the sainted Gabe and Father Jim Cooper.

My friends in Christ, like Adam and Eve, we are faced with difficult decisions every day. We don’t always make the right choice. Maybe we can’t even be certain what the right choice is. God Knows.

But he isn’t telling.

All we can do is follow our God-given instincts and keep to the faith. Let’s live every day knowing that God expects an accounting for our actions and the decisions that we make.

Not bad.  Now for the big question. How can the Lions be giving six points?
​On Black Rose Writing

​On Barnes & Noble
From The Midwest Book Review

Synopsis: Father Jim has a gambling problem, a girlfriend, and his brother Gabe just killed his bookie. Detective Mark Porfino investigates while mob boss Mario Gallante arrives to figure out why his protege was found floating in the harbor. Mark and Mario form an unholy alliance, with fast food, drinking, Girl Scout cookies, a dead man with a morbid sense of humor, and a wedding with a miracle, contributing to the search for the killer. Jim must weigh family loyalty and protection of his lover against the vows he's made to himself and his church. Will Gabe confess and relieve Jim of his burden? Or will they both be dragged further into the abyss until their secret is revealed?

Critique: Very highly recommended, especially for community library collections, "The Long Harbor Testament" reveals author Tom Minder's genuine gift for narrative storytelling and complete mastery of the Mystery/Suspense genre. A compelling and deftly crafted read from cover to cover, it should be noted for the personal reading lists of dedicated mystery buffs that "The Long Harbor Testament" is also available in a Kindle format ($3.99).
​

Reviews from Goodreads.com
Powered by